Is it Tuesday? Every Tuesday a new poem appears in the box and on the blog.

The guy Dad sold your car to
comes back to get his money,

leaves the car. With filthy rags
we rub it down until it doesn’t shine

learn you won’t be dead.
The unsuffering ends

when the mess of your head 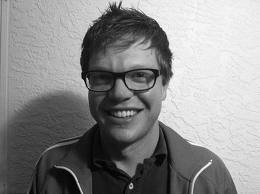 a bullet in your mouth.
You spit it into Dad’s gun

before arriving in the driveway
while the evening brightens

and we pour bag after bag
of leaves on the lawn,

waiting for them to leap
onto the bare branches.
originally appeared in Passages North

I asked the incredibly talented Matt Rasmussen for a poem about sibling loss because it is an experience we share. What Matt does so brilliantly in this poem is capture all the parts of such loss—the bewilderment, the anger, the utterly mundane scenes that preceed an event that changes everything for a family.

The poem starts with a title that is explanatory—it describes exactly the fantasy that will follow, the reverse of the series of actions that took place when the speaker’s brother shot himself.

The poem begins casually, as if the brothers were talking: “The guy Dad sold your car to/comes back to get his money” and this doesn’t become jarring for a few stanzas. And yet the nagging straightforwardness of the financial transaction catches us, just a bit.  The father and son, with the returned car, wipe it down “with filthy rags” because the car is getting dirtier as time moves backwards, until we come to the first really brutal stanza:

Of course, if events could move in reverse, the blood would have to go back into the car before it could go back into the not-dead body of the brother, and yet. The initial discomfort we feel at the financial transaction of selling the car is heightened here by a sense that no brother—or father—should be doing this job. Not ever.  Rasmussen’s monosyllables work well here to heighten the brute force of the action he describes.

The poem then shifts, turns toward beauty in the snow that is not falling now but lifting:

learn you won’t be dead.

Anyone who has suffered an unexpected tragedy recognizes this moment, the moment when we learn of the loved one’s death and everything changes and we have to “learn” the world anew. But in reverse, the moment is still fraught. The speaker can’t quite unknow the loss; instead, he has to learn a different truth, his brother “won’t be dead.” Which is not the same as saying “you are alive.” We see this struggle to believe the fantasy the speaker is creating in the next lines, which are angry and direct:

when the mess of your head
pulls together around

a bullet in your mouth.

Here the speaker acknowledges both his own anger “mess of your head” and the hopelessness of the fantasy. To wish his brother back means to wish him into suffering again.  So whose suffering will be relieved? Whose will carry on?

The poem ends brilliantly, in the familiar, mundane world of family tasks: two brothers working in the yard together.  Those leaves could no more return to the trees than a brother return to life. And while the speaker realizes this, the image of the brothers in the yard increases the sense of loneliness and loss. What we lose when we lose a sibling is the person who helps us remember the moments, not only important ones, that construct our lives.  We lose the person who we assumed would be there through all the hard journeys. And in dying, the sibling has left the hard things—parental suffering, aging, grief, loneliness—to us. And of course, we lose the joys we would have shared, moving through this gorgeous world together.

19 years ago today my sister Kate died from carbon monoxide poisoning. Thank you, Matt, for this beautiful poem. It helps make a sad day a little bit less so.

Matt’s first book, Black Aperture, winner of the prestigious 2012 Walt Whitman Award from the American Academy of Poets, will be published in May by Louisiana State University Press. For more about Matt or his book, go to

http://lsupress.org/books/detail/black-aperture/
Posted by Cullen Bailey Burns at 6:13 AM

Poem in a Box

This is a blog to provide information about the poems found in the poem box outside my house. Each Tuesday, a new poem will find its way to the box out front. Here on the blog, I will write some comments about the poem and hope you will join me in conversation.

Cullen Bailey Burns
I am the author of Paper Boat (New Rivers Press) and the forthcoming Slip (New Issues Press), both books of poetry. I teach English at Century College, workout at the Blaisdell Y, keep bees at our place up north, and mother my grown daughters as much as they'll let me.

View my complete profile
"Writing is a way of continuing to hope ... perhaps for me it is a way of remembering I am not alone" --Lucille Clifton